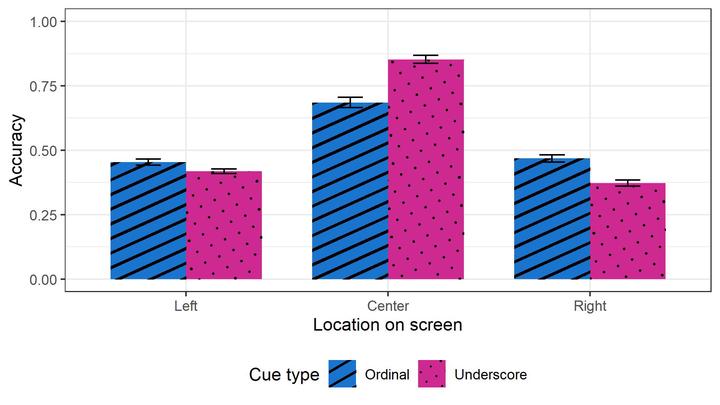 In three Experiments we measured accuracy in identifying a single letter among a string of five briefly presented consonants followed by a post-mask. The position of the to-be-identified letter was either indicated by an ordinal cue (e.g., position 2) or an underscore cue (e.g., #####). In Experiment 1 the ordinal cue was presented prior to onset of the letter string, and the underscore cue presented at string offset. In Experiments 2 and 3, both the ordinal and the underscore cues were pre-cues. In all Experiments, letter strings could either appear centered on fixation or shifted randomly to the left or to the right. Participants were tested in separate blocks of trials for each of the four conditions generated by the combination of cue-type and string-location variability. In Experiment 1, letter identification accuracy was higher with ordinal cues and with fixed string locations, and ordinal cueing was more affected by string location variability. In Experiments 2 and 3, letter identification accuracy was higher with underscore pre-cues. We conclude that under conditions of brief stimulus durations (100 ms) and backward masking, letter-in-string identification accuracy is determined by read-out from location-specific letter detectors, independently of the type of cueing. Differences in the effectiveness of different types of cue are determined by differences in the ease of isolating a given gaze-centered location, and by differences in the ease with which attention can be directed to that location.