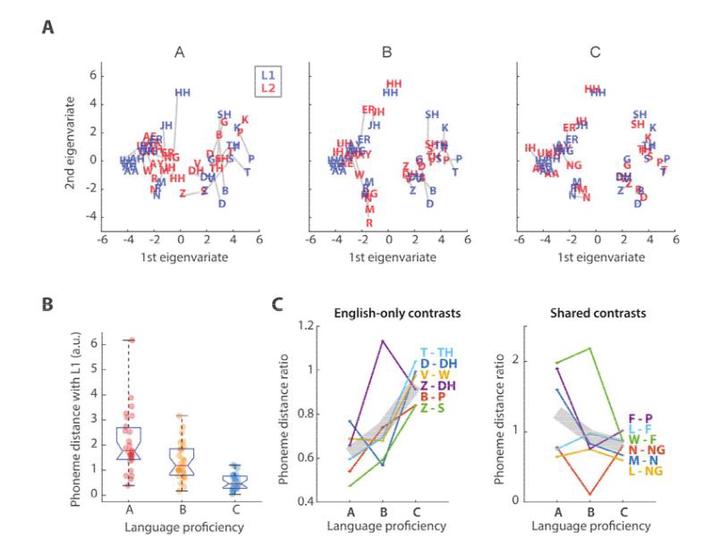 Acquiring a new language requires individuals to simultaneously and gradually learn linguistic attributes on multiple levels. Here, we investigated how this learning process changes the neural encoding of natural speech by assessing the encoding of the linguistic feature hierarchy in second-language listeners. Electroencephalography (EEG) signals were recorded from native Mandarin speakers with varied English proficiency and from native English speakers while they listened to audio-stories in English. We measured the temporal response functions (TRFs) for acoustic, phonemic, phonotactic, and semantic features in individual participants and found a main effect of proficiency on linguistic encoding. This effect of second-language proficiency was particularly prominent on the neural encoding of phonemes, showing stronger encoding of “new” phonemic contrasts (i.e., English contrasts that do not exist in Mandarin) with increasing proficiency. Overall, we found that the nonnative listeners with higher proficiency levels had a linguistic feature representation more similar to that of native listeners, which enabled the accurate decoding of language proficiency. This result advances our understanding of the cortical processing of linguistic information in second-language learners and provides an objective measure of language proficiency.