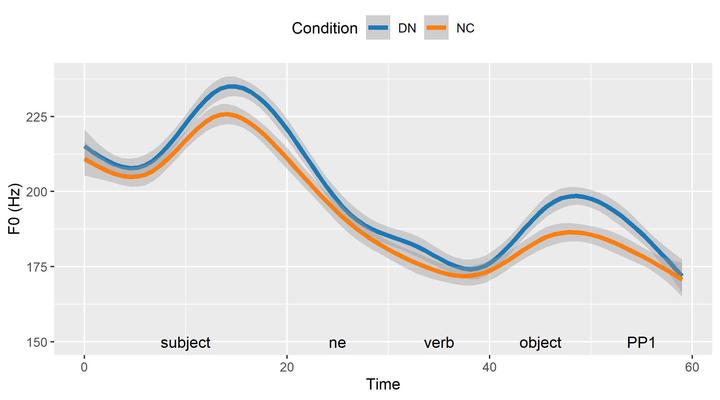 While it has long been assumed that prosody can help resolve syntactic and semantic ambiguities, empirical evidence has shown that the mapping between prosody and meaning is complex (Hirschberg & Avesani 2000; Jackendoff 1972). This paper investigates the prosody of ambiguous French sentences with multiple potentially negative terms that allow two semantically very distinct interpretations—a single negation reading involving negative concord (NC), and a double negative reading (DN) with a positive meaning reflecting a strictly compositional interpretation— with the goal to further research on the role of prosody in ambiguities by examining whether intonation can be recruited by speakers to signal distinct interpretations of these sentences to hearers. Twenty native speakers produced transitive sentences with potentially negative terms embedded in contexts designed to elicit single-negation or double-negation readings. Analysis regarding the F0 and the duration of the utterances revealed distinct prosodic profiles for the two readings, confirming previous evidence that speakers can produce characteristic acoustic cues to signal intended distinctive meanings (Kraljic & Brennan 2005; Syrett, Simon & Nisula 2014). Our results reveal that the NC readings feature a focused subject and a post-focally more compressed object, in contrast to the DN readings where both the subject and the object were independently focused. They do not relate DN to contradiction but link negative meaning with focus on French negative concord items (NCI). The paper discusses broad implications of these findings for theoretical approaches to NC and outlines further questions for the syntax-prosody interface of these constructions.